Joy, Despair and Hope: Reading Psalms
Recaptures the power and immediacy of psalms, showing how these poems can speak to us again.
The Spirit of Renewal: Faith After the Holocaust
Exploring theological reactions to tragedy and rebirth in Jewish history and today.

The Joys and Travails of Translation 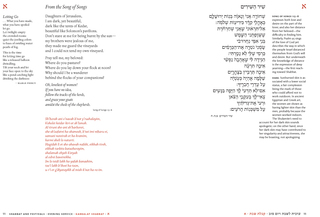 Translating can be a dangerous business. The great English translator of the Bible, William Tyndale, whose work formed the basis for the King James Version, was martyred in 1534 during the reign of King Henry VIII. Tyndale was responsible for some lovely innovations in language such as ‘lovingkindness’ for the Hebrew hesed -- a trait clearly not exercised by his detractors. Today’s critics of translation may be less violent but no less passionate about what they consider right or wrong about translations.

Continue reading at: The Rabbinical Assembly
Read More
Be the first to comment

Derekh: Pathways to the Heart and Jewish Tradition
Courses, podcasts, and other resources for spiritual seekers by Rabbi Edward Feld and Merle Feld
Authors Guild
Advocates for published authors since 1912
Authors Guild Directory
A compendium of member websites
Loading…}